The website for my spring 2015 course at Georgia Tech contains the syllabus, assignments, and samples of student work.
Responses from Students
"Throughout my high school English classes, I approached the subject with a sense of trepidation. Although I was given some intellectual freedoms, it seemed to me that literature was the compilation of immutable ideas. However, as I learned in ENGL 1102, literature is far from stagnant. Although works are fundamentally rooted in static words on a page, it is the interpretation of those words that gives a work meaning and in turn, the interpretation of a work gives those words meaning as well – an inherently dynamic process. ENGL 1102 challenged me to view literature from a new perspective – a perspective which incorporated the context of the era in which that literature was written."

"At the start of class, Dr. Golden would present a slideshow presentation containing images and key thoughts that related to the topic of discussion at the time. For example, after reading Alfred Lord Tennyson’s ballad “The Lady of Shalott,” the class discussed the similarities between the words written in the poem and John William Waterhouse’s depiction of the eponymous protagonist in his painting “The Lady of Shalott.” Not only did this increase class participation and the quality of our discussions, but it brought color to a period of time typically envisioned as monochromatic.

Other mediums of communication, such as verbal, were also used, as when we would often read texts aloud in class. This was particularly beneficial for the various poems which we read, such as “The Lady of Shalott” and “Goblin Market.” Listening to the cadence and intonation of the spoken word, as well as listening to various related songs, helped to capture the liveliness and colorfulness of these works.

Capturing the “color” and creative spirit of works was particularly important while examining The Picture of Dorian Gray. Wilde is perhaps the epitome of color and creativity and to relegate analysis of his work to just text would have been to superficially understand his work. Thus, Wilde’s novel was presented in a variety of different ways. One such way was through the electronic book that I created for our second project in this class. The electronic book consists of a combination of text, imagery, video, and hyperlinks, and presents Wilde’s work in a way that is both easily accessible and yet meaningful."

"Throughout the course, Dr. Golden would ask initial questions or present activities in order to catalyze conversation, and from this point, the class would begin to discuss certain issues. Dr. Golden’s skilled structuring of the class to keep the class’s attention greatly facilitated such discussions."

"Another key forum of discussions happened online via blog posts. The blog posts functioned as mini-essays, allowing for a brief focused argument on a variety of topics, from Barack Obama’s speech on higher education to the presence of the supernatural and the Gothic. Not only did the blog posts function as a sounding board for ideas, but the comments associated with them furthered this exchange of ideas. Discussion was now no longer confined to the walls of the classroom or the section of the class one attended; it could now happen organically as different people contributed new perspectives otherwise not heard in class.

I found the blog posts to be truly useful. Not only did they help to focus my thoughts but they allowed me to interact with people whom I ordinarily would not interact with, either because they were too shy or because they were in a different section of the class. From this, I realized the importance of a community and how powerful the Internet is as a vehicle for the dissemination and democratization of ideas. Just because literature has traditionally been contained between the covers of books or the papers of pamphlets does not mean that it must stay so. The incorporation of technology opened up my mind to a new generation of English – one without borders."

"Sometimes, people have the mindset that areas of knowledge unrelated to one’s area of expertise are frivolous or unnecessary; this course showed me otherwise. I learned that even seemingly disparate parts of society can be intimately related, and that, as a producer of such technology, it is important to consider its implications. Through the examination of technology and art, I learned to examine my own words and beliefs in a more critical manner. Overall, although certain aspects of this course were initially challenging, I now consider it to be one of the most rewarding courses which I have taken. Rather than feeling trepidation, I now view English with confidence, and I hope to apply the lessons which I have learned to my future."

"Some of my favorite parts of this class have been analyzing Victorian art, looking at artistic versions of literature we read, and using art to make our own representation of a novel. Analyzing various interpretations of art has helped me to develop my own abilities to understand the driving forces of visual artists and how different people have unique perspectives on the same piece of literature. This was an especially intriguing idea to delve into as a performing artist: to see what drives other types of artists’ interpretations and motivations for their work and comparing them to my own driving forces. For example, the numerous paintings of The Lady of Shalott that we looked at in class showed various visions of the same poem . . . just as there are many different versions of “The Nutcracker,” “Sleeping Beauty,” and many other ballets. Furthermore, in artifact 2, I was allowed to use this ability to interpret art to help weave visual art with written text to portray the first chapter of the novel The Picture of Dorian Gray, which I do not think that I would have been able to do as successfully or effectively before this class."

"I have previously thought a lot about different aspects of the Victorian Era as its one of my favorite time periods to explore, including women’s roles, the role of the British monarchy, the success of Queen Victoria’s reign, and the everyday lifestyle of the time. I usually think of top hats, walking canes, corsets, and parasols when I picture the Victorian Era, not the quickly advancing technology of the time. Due to this, “Technology” is the part of this class that I was most to delve into and study. This is why I focused a lot on the technological aspects of the time period in some of my blog posts for the class: “The Written Letter vs. The Telegraph” and “The Horrors of Developing Science.” The amount of urbanization and development that occurred in the Victorian Era is awe-inspiring, and learning these aspects of this time period in class were some of the most fascinating moments. From learning in depth about the development of the telegraph in The Victorian Internet, seeing the use of primitive electricity in Kipling’s “Wireless,” to watching Dr. Jekyll use a new potion to become Mr. Hyde, I was able to see an entirely new side of the Victorian Era that I had never really thought about previously.

Even more so than art, I think that technology was really the heart of this class. Mainly because we were able to develop in our understanding of Victorian, 19th century technology while using our own modern, 21st century technology in our projects. Each of our projects allowed us to use technology to form something greater than just a plain essay, whether that was using a photo from a movie in artifact 1 to enhance the text, to creating an entire interactive e-book in artifact 2, to presenting a section of a novel and the e-book using a powerpoint in artifact 3. Personally, this helped me to grow as a communicator and be able to use various forms of technology to develop my ideas and display them effectively. For example, I was able to interconnect images reflecting the ideals of the arts and crafts movement, a portrait of Prince Albert, and images of Victorian factories to communicate some fundamental beliefs of the Arts and Crafts movement and their relationship to The Picture of Dorian Gray. I was then able to further this project and develop my communication skills by giving an oral presentation of the e-book along with an interactive activity for the class.

In previous English classes in high school, the main goal was to make good grades, whatever that meant. My main weakness in previous English classes was not trying to push the envelope and choosing safe topics. This semester, I decided to try new things, like basing an entire essay on one word in the artifact 1 essay. I decided to challenge myself to trace a single word through The Strange Case of Dr. Jekyll and Mr. Hyde and analyze its many unique meanings and its relationship to technology. The goals of the class (interweaving technology) and requiring a photo to be included in the essay . . .  helped me improve my ability to analyze photos and also incorporate multiple forms of art and technology into something that would have just been a paper previously.

Though this is my last English course, the techniques that I have learned in this class will still be vital for my other classes. In all of my other courses, I hope to strive to maintain the same level of progress: to keep myself on track as much as possible throughout the writing process and, more importantly, to challenge myself. Most importantly, the ability to weave together multiple forms of communication skills and mediums of technology will be extremely valuable in the future. Projects and presentations in other classes will be much more interesting and inclusive of different modes of technology."
Sample Project

Student E-Book of Chapter 2
This e-book is available here. 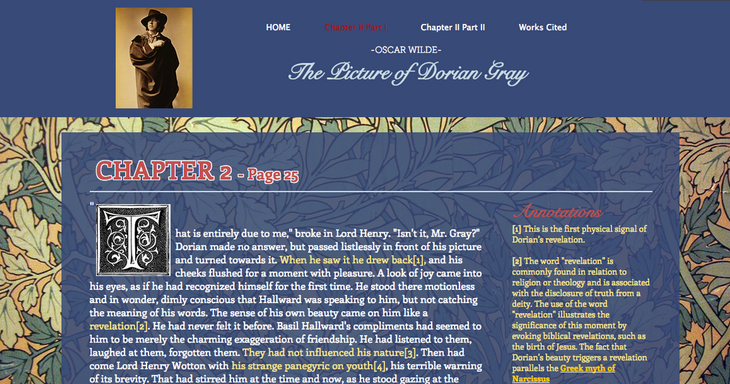